When hypersensitive skin's unpleasant sensations are accompanied by redness, facial skin can become Couperose-prone or, more seriously, develop a condition called Rosacea. Although these two conditions are often confused, the symptoms do differ.

What are the symptoms of Rosacea and Couperose-prone skin and how do they differ?

Rosacea is a chronic, episodic inflammatory disorder that affects up to 10% of the adult population. As it sits within the hypersensitive skin 'family' sufferers describe unpleasant sensations such as, among others, stinging and burning - subjective feelings that are associated with hypersensitivity.

With Rosacea diffuse redness appears on the cheeks, chin, nose and forehead.
Severe Rosacea can lead to rhinophyma, a thickening of the skin on the nose.

On top of those symptoms they typically experience flushing and show signs of diffuse redness of the cheeks, chin, nose and forehead, couperosis, blemishes and pustules. Occasionally the ocular area is also involved and this can lead to styes and conjunctivitis.

In the most serious cases of Rosacea, skin can thicken and excess tissue can form. This usually affects the nose and is known as rhinophyma. Rhinophyma makes the nose look large and bulbous and can give people the mistaken impression that sufferers are alcoholics. This can affect sufferers psychologically as well as physically.

"The papules and pustules that appear are similar in appearance to those in acne-prone skin but in Rosacea there are no blocked pores, the skin is more likely to be dry than greasy and Rosacea spots don't leave scars."

Couperose-prone skin (also known as Couperosa) is also a hypersensitive skin condition so it too includes unpleasant sensations such as stinging and burning in its list of symptoms. Couperose-prone skin is typified by redness, dryness and sensitivity. The redness is a result of dilated blood vessels which, due to the skin's weakened elasticity, expand when there is a rush of blood to the skin but do not contract afterwards as would happen in normal skin.

Couperose-prone skin can come and go in its early stages but, as it progresses to more advanced stages the redness can become permanently visible on the skin.

Red skin from hypersensitivity differs from everyday blushing as it lasts considerably longer (hours, days or even months) and the redness may not improve until the skin is treated.

If you suspect you have Rosacea seek the advice of a doctor or dermatologist as early treatment can reduce the chances of the condition progressing.

Causes and triggers of Rosacea and Couperose-prone skin

The exact cause of Rosacea is unknown. However, experts have identified a number of factors that connect sufferers. For example, the prevalence of Rosacea is highest among fair-skinned individuals, particularly those of Celtic and northern European descent.

The onset of the disorder usually begins between the ages of 20 and 50 years. Females are affected more than males and women are more likely to experience symptoms on the cheeks and chin. However, when it does affect males, they are more likely to progress to the end stages of severe Rosacea when rhinophyma may occur.

Rosacea is a progressive skin condition that usually begins with the subjective sensations associated with hypersensitive skin such as stinging and burning. At first flushing (when the skin turns red) can be temporary but, as the condition progresses, this redness can become permanent. Bumps and pimples may appear and, in some cases, eyes may become bloodshot. In more severe cases, rhinophyma will appear, eyes may become swollen and the complexion more inflamed.

Like Rosacea, Couperose-prone skin can be caused by a number of factors including age, genetics and diet.

Both conditions are made worse by certain triggers. Although these vary from person to person, the most common include:

Avoiding known triggers is the best way to minimise the symptoms of both Couperose-prone skin and Rosacea.

It can be a good idea to keep a diary to help identify triggers.

It may take some time to identify which particular factors are most troublesome so it can be a good idea to keep a diary of exposure to all endogenous and exogenous factors and any subsequent reactions.

The psychological impact of having such a visible skin condition can cause sufferers to flush or blush out of embarrassment, anxiety or depression. This simply exacerbates the problem. It can be helpful, therefore, to use a concealing cream to cover redness and reduce further psychological damage.

There is no single treatment that can guarantee to cure Couperose-prone skin or Rosacea altogether but hypersensitivity can be calmed and the skin barrier improved with special, active skin care.

Airlesss dispensers, with a self-closing actuator, protect Eucerin formulas from contamination and oxidation.

Firstly, hypersensitive skin is characterised by a compromised skin barrier which makes underlying layers more prone to irritations. To minimise the chance of intolerance, and improve the skin's elasticity, Eucerin UltraSENSITIVE and Eucerin AntiREDNESS products provide effective moisturisation to counteract the skin barrier's increased trans-epidermal water loss (TEWL). Each product is a 'pure' formula so it only contains a limited number of ingredients and uses anti-contamination packaging which is fully sealed to minimise the risk of any airborne bacteria reaching the formula.

The second part of the Triangle is the hyper-reactive sensory fibres in the epidermis. Eucerin is the first medical skincare brand to use an active ingredient called SymSitive* in its hypersensitive skincare ranges. SymSitive* effectively acts as a sensitivity regulator directly at the source of hyper-reactivity, calming sensitivity instantly. What's more, used regularly, Eucerin Hypersensitive skin products make skin more resistant to internal and external stress. 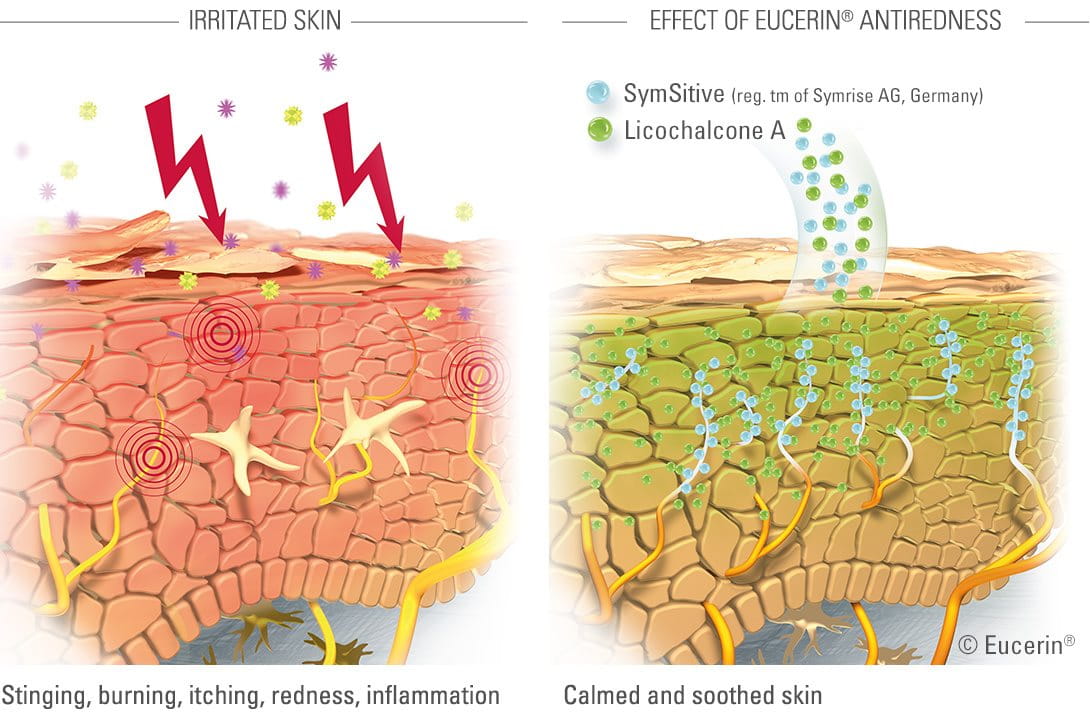 Day and night cream with SymSitive* for dry, hypersensitive skin