Psoriasis is a common chronic (meaning lifelong) non-contagious and inflammatory skin disease which tends to follow a course of flare-ups (known as exacerbations: periods when symptoms are severe) and periods of remission (where symptoms are mild or non-existent). Psoriasis most commonly presents itself with very scaly red or white patches of skin. Symptoms can appear at any age, but are most likely in the early stages of adulthood or in later life − around 50–60 years of age.

Patches of Psoriasis are biologically distinct from classic dry skin (also known as Xerosis) and are classified as erythrosquamous, meaning both blood vessels and deeper epidermal skin layers are involved. Psoriasis is caused by a defect in cell growth.  A genetic predisposition is an underlying factor. Other factors that may be responsible are:

• Inflammatory reactions in the deeper dermis and upper epidermis.
• An increased turnover rate of keratinocytes (the predominant cell type in the epidermis).
• An altered desquamation process (desquamation refers to the natural process in which the outermost layer of the skin is shed).

Plaque Psoriasis (Psoriasis Vulgaris) is the most frequently occurring form of Psoriasis, accounting for around 80% of cases. It appears as red-coloured lesions which are usually raised due to being inflamed. They can also be covered by a layer of white scaly skin. These lesions are typically found on the knees and elbows, scalp or lower back.

Guttate Psoriasis is characterised by ‘guttate lesions`: small red-coloured spots that appear on the body or limbs. They are usually not as raised as Plaque Psoriasis lesions. Guttate Psoriasis first starts in either childhood or the early years of adulthood and often appears suddenly.

Inverse Psoriasis appears as bright red lesions which are smooth and shiny. They are mainly found in skin folds − tender areas such as the armpits and other skin folds such as the groin or under the breasts or buttocks. These are also the areas that can become irritated due to friction and/or sweating.

Pustular Psoriasis is predominately seen in adults and is characterised by white blisters of pus (which are non-infectious). These blisters may have reddened skin around them, and can be localised or widespread.

Erythrodermic Psoriasis is mainly inflammatory in nature and therefore often affects the majority of the body’s surface. Extensive skin redness results in scales being shed in large sheets which causes severe pain and discomfort.

Psoriasis – what causes it?

Genetics
Studies indicate that, in most cases, Psoriasis is inherited as incidences of Psoriasis are high among the relatives of affected individuals. It is thought that certain inherited genes may be linked to Psoriasis, but the exact way this happens is not yet understood.

Infections
Infections are often involved in the development of psoriatic symptoms. Bacteria, particularly Streptococci, are the most commonly implicated pathogens, and are linked to Guttate Psoriasis. Human Immunodeficiency Virus (HIV), although not a direct cause of Psoriasis, is known to increase the likelihood of developing more severe Psoriasis in cases where the condition already exists.

Stress
Psychological stress may worsen the condition, and, in some cases, may be enough to trigger it.

Medication
Some medications – particularly lithium, antimalarial drugs and medication for high blood pressure – can trigger Psoriasis. Psoriasis symptoms can also ‘rebound’ when Psoriasis medication is suddenly stopped. In these instances, the symptoms are often severe.

The most common topical therapies for Psoriasis are creams or lotions containing  corticosteroids or  keratolytic agents. Moisturising products and emollients are used as adjunctive care and are beneficial during the remission and flare-up phase of Psoriasis.

Topical treatments and keratolytic agents are essential for the treatment of Psoriasis. They support the efficacy of any systemic drug therapy. During the initial keratotic phase (the name given to the phase when psoriatic plaques start to form)  Keratolytic agents are most beneficial due to their exfoliating properties. They help to reduce the scales of psoriatic plaques as they exfoliate excessive skin. These agents can be used in conjunction with moisturisers and emollients. 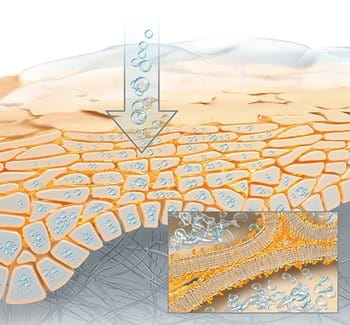 The formula with Ceramide repairs the skin barrier and reduces moisture loss.
Urea and other NMFs bind in water and relieve dryness, scaliness and itchiness. Additionally Urea supports the exfoliation of excessive skin.

Emollients are used to smooth the dry, rough skin of the stratum corneum and reduce scaling. The most commonly used emollients in dermatology work by creating an occlusive film that reduces the evaporation of water and helps to keep the skin’s surface hydrated.

Regular use of moisturisers is important and should be continued during both a flare-up and periods of remission..

This light face cream for dry to very dry skin instantly moisturises and soothes tightness to give the skin a smooth and supple feel.
More Details