Acne Vulgaris is the most common skin disease in industrialised nations. It usually begins during puberty, in line with hormone changes, and may persist into later adulthood. Between 70% - 95% of adolescents1 are affected to some degree by blemished skin  and 15-30%1  of them will use acne medication to relieve symptoms.There are also increasing numbers of adults, particularly women, experiencing acne later in life.

This article examines the meaning of blemished skin and looks at what makes skin acne-prone. It looks at how pimples, papules and pustules develop and the difference between them. We explain why some people are more prone to blemishes then others, the external and internal factors that can trigger acne and how best to alleviate symptoms and care for skin.

What is blemish-prone skin and acne?

Blemish-prone skin is skin that has a propensity to develop comedones and pimples. It is often oily and appears shiny. This is because the sebaceous glands produce more sebum than in other skin types.

Acne (full name, Acne Vulgaris) is a non-contagious skin condition characterised by pimples caused by inflamed and infected sebaceous glands. The disease is most common in adolescents, but symptoms can persist into adulthood and some people, especially women, experience symptoms for the first time after the age of 25. Persistent or late-onset acne is known as acne tarda. Find out more about adult acne is our article Acne Tarda and if you’re looking to treat acne as well as signs of ageing you can find out how in acne and aging skin.

But acne doesn’t just affect people’s skin, it impacts on their quality of life too. Symptoms can be stressful and cause issues around self-confidence. Read more in the psychological impact of acne. This is just one reason why it’s important to consult a dermatologist if you are in any way troubled by your skin condition.

There is a range of acne treatment options available and timely medication can prevent a deterioration in skin condition and subsequent damage, such as hyperpigmentation and scarring.

Acne is sometimes confused with Rosacea. Rosacea is a hypersensitive skin disorder where facial blood vessels enlarge causing a reddened appearance. It can also cause papules and pustules - hence the confusion. Rosacea requires different treatment to acne and you can find out more about how to care for it here. If you are unsure if you have acne or rosacea, ask your doctor.

What causes and triggers blemishes on skin?

There are several myths surrounding acne - for example, that people with blemishes are less hygenic than others. Here are the key factors that medical professionals know are likely to make some people more prone to acne than others:

Genetics
Genes determine our skin type and some of us have skin that is more reactive and prone to inflammation, blemishes and acne than others. If both your parents had acne there is a higher chance that you will develop the condition.

Hormones
Acne is a hormonal disease. Hormones are responsible for the development of the sebaceous glands and they also stimulate sebum production in those sebaceous glands (an overproduction of sebum is one of the symptoms that defines blemish-prone skin).

The increase of hormones during puberty is the main reason why acne is most prevalent in adolescence, but hormones continue to effect men and women differently at different life stages: changes in hormonal levels during the menstrual cycle often causes flare-ups for women in their 20s and 30s. Find out more about the relationship between hormones and acne in our article hormones and acne and read more about adult acne in our article on Acne Tarda.

Medication
Some medicines - such as steroids and lithium - can cause acne. Find out more in acne and sport.

Whilst not the cause of acne, the following may trigger and aggravate symptoms:

Diet
There is some evidence of correlation between diet and acne. A diet with a high glycemic index and lots of dairy products may trigger or exacerbate acne. Read more in acne and diet: the background.

Stress
Stress can trigger hormones which in turn stimulate sebum production and exacerbate acne. Read more in acne and stress.

Inappropriate skincare
Harsh, soap-based cleansers and water that is too hot can disrupt skin’s natural balance and exacerbate symptoms. Some skincare products and make-up are also comedogenic (meaning they clog pores and cause acne).

Find out more about the causes and triggers of acne.

How do blemishes and acne develop?

There are many, complex and interrelated factors involved in the development of blemishes and acne.

Inflammation
Acne is an inflammatory disease and inflammation is present at every stage of its development. As we know, our genetics and hormones make some of us more prone to inflammation than others. Micro-inflammation (non-visible inflammation) is a root cause of acne and can be triggered by many different factors including changes in hormones, bacteria and changes in the composition of sebum on the surface of skin.

Seborrhea
The sebaceous glands secrete an oily substance called sebum that keeps skin and hair supple. Excess sebum production (triggered by hormones), which typifies blemish- and acne-prone skin, is known as seborrhea. Excess sebum on skin’s surface interefers with the natural process by which skin sheds dead cells (known as desquamation). The composition of the sebum lipids which build up in the sebaceous glands also cause further micro-inflammation.

Hyperkeratosis
Hyperkeratosis is an abnormal thickening of the external layers of skin. It is caused by excessive cell production (triggered by hormones) and inadequate desquamation of dead cells. These cells form plugs that block the sebacous glands. Sebum builds up and the follicle wall bulges causing comedones (blackheads and whiteheads).

Bacteria
Propinionbacterium acnes (or P. acnes) is a bacteria that normally lives harmlessly on skin’s surface, but people with blemish- and acne-prone skin can be more sensitive to it and it can trigger inflammation. Excessive sebum production also creates an enviornment which helps P. acnes to grow. It starts to colonise the duct of the plugged sebaceous gland causing further inflammation and leading to papules and pustules.

In severe cases the follicular wall bursts in the late stages of inflammation. Lipids, fatty acids, corneocytes (cells), bacteria and cell fragments are released and can cause further inflammation in the surrounding skin.

What can I do to help reduce blemishes and care for my skin?

A thorough skincare routine
Cleanse your skin twice a day and care for it using products that have been specially formulated to suit your skin’s particular needs such as those in the Eucerin Dermo Pure range. Find out more in the ideal skincare products and routine for blemish-prone skin.

Non-comedogenic coverage
Only use concealers and make-up products that have been specially formulated for acne-prone skin such Eucerin Dermo Pure Cover Stick.

Medical treatment
There is a selection of options available for acne. Your doctor will be able to advise which is best for you. Find out more in acne medication and possible side effects.

Look after yourself
Exercise, a good night’s sleep and a healthy, balanced diet will help you to stay healthy and positive overall, reduce stress (which can trigger hormones and exacerbate acne) and improve your skin’s natural resillience. Try to stop smoking too. Find out more in what changes can I make to my diet?, acne and sport, and acne and stress. 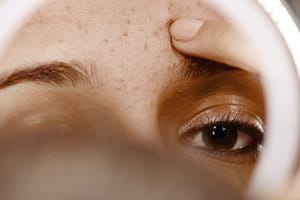 What are the different types of acne? 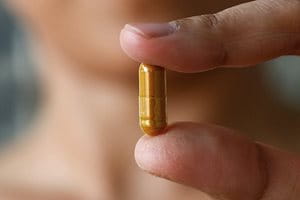 Acne medication – the most common treatments 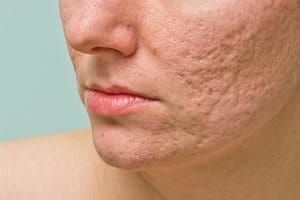 Acne scars – What can you do to reduce or remove them?

We are using tools to analyze our users’ behavior in order to optimize our website. You can object to this at any time here.

We are using tools to provide you with individual product information for marketing purposes, also beyond our website. You can withdraw your consent at any time here.